Soon enough the nights will start drawing in again and the issue of Seasonal Affective Disorder (SAD) will start getting more airtime – something to look forward too… Seasonal Affective Disorder is a condition that is often loosely likened to depression, but with a seasonal pattern. Someone with SAD may notice symptoms such as low mood and a lack of interest in life which adopt a seasonal pattern. It is sometimes called “winter depression” because it appears as the nights draw in, usually being felt worst in December, January and February, before lifting in the spring and disappearing in the summer. 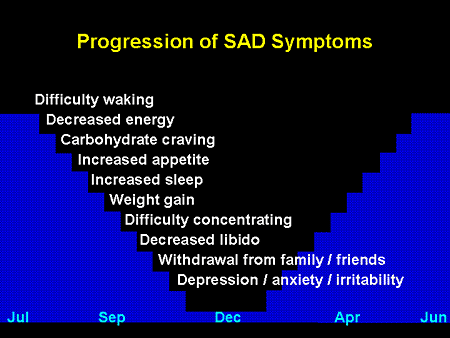 It’s a pretty significant issue, with studies showing that around 15% of patients suffering recurrent mood disorders exhibit the maladies associated with Seasonal Affective Disorder, and in reproductive years, is four times more common in females than males. The causes of Seasonal Affective Disorder are thought to be linked to a reduced exposure to sunlight during the shorter winter days, which also helps explain why I know quite a few people in the UK who seem to suffer it! In fact, it seems that vulnerability to SAD is increased the further away you are from the equator.

A 2010 study published in the British Medical Journal found that up to 6% of UK residents suffered it (with 2% of the Northern European population having severe depression resulting from SAD).

Although there are lots of lines of thinking about the exact connection between sunlight and SAD, the main theory is that light probably stimulates the brain’s hypothalamus (which, you might remember from the good old school days, controls things such as mood, appetite and sleep – all which affect how you feel). The theory is that the lack of light affects the production of melatonin and serotonin, and also likely affects the body’s circadian rhythm (which regulates biological processes through a 24-hour period).

For more detail on the link between serotonin and Seasonal Affective Disorder, download the 2013 study “Role of serotonin in seasonal affective disorder” which was published in the European Review for Pharmalogical and Medical Sciences. One of the findings in that study is that the depletion of L-Tryptophan (a precursor of serotonin) is associated with a relapse of depressive symptoms in patients who are in remission due to light therapy. And serotonin levels have been found to be lowest in the winter months.

For a list of possible ways to treat SAD, check out WebMD or Patient.co.uk’s overview.

Or move to Spain…

What is serotonin deficiency?